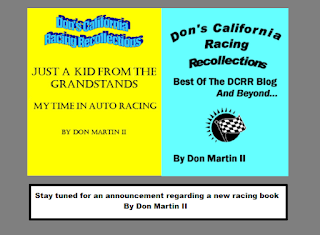 Just A Kid From The Grandstands:  My Time In Auto Racing


Don's California Racing Recollections:  Best Of The Blog And Beyond


Racing History, Stories, Statistics And Pictures
Available via print on demand at Lulu in Hard Cover or Paperback

For years we've made a commitment to cover motorsports on the West Coast, and we're very proud of our record. We always endeavor to give you the most accurate information possible, but sometimes some details aren't available to us when we go to press. Therefore, we want to remind you that any finishes listed in the articles and stats posted on this page are unofficial. As always, we refer you to each race track's webpage for official results and point standings. Our goal is to cover racing to the best of our ability, but we are an unofficial news source for the tracks covered in each post. Thank you for reading and thank you for your support.

From the Grandstands By Ron Rodda HERE